SUNDANCE 2017: Heart Focused Highlights Of Three Films You Probably Haven’t Seen But Should 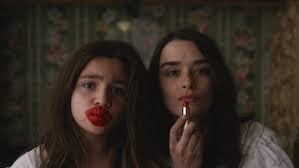 It’s one of the most renowned showcases of independent film worldwide, when the who’s who of international show business invades a small, skiing town called Park City, Utah. The locals were warm and welcoming even if the weather wasn’t. The streets and buildings and attendees blanketed with the cold, white stuff, but it didn’t prevent most screenings from being sold out and all panels full to capacity. The Front Runner team were lucky enough to see some of the big-name, showcase movies, but we wanted to draw focus to three “smaller” projects. These independent films span three categories, and tell very different stories, but with one thing in common – they are told with humor and heart. We believe it’s these two elements that are the foundation of every well made and well told story, it’s the starting point for everyone of our projects.

This 30 minute short-form piece is actually the pilot episode of a soon-to-be shot web-series. Produced by Adaptive Studios, it was snapped up by French Online Distribution company Blackpills before it’s premiere on Saturday Jan 21st.
A thriller, set in a very ‘merican, very male-centric, small mining town in the 1980’s, the story opens with two contrasting shots of female characters; the slow-motion dancing of three young women, hypnotic and ghostly in their flowing white nightgowns. This urethral beauty is immediately followed by a cold, harsh shot of the mine opening, out of which walks a naked and obviously traumatized teenage girl. The mystery of the series’ title is revealed to be the only word that the victim is able to utter since her attack and brutal rape. The rest of the story centers on the town’s Sheriff (talented newcomer Tyler Vickers), widowed father of the three girls in the opening shot, who is tasked with finding the person(s) responsible.
It is the beautifully shots and abstract symbolism that take what could be another police procedural and turn it into a work of art. The raw and powerful performances by a cast of mostly unknowns (including hauntingly beautiful Lucille Sharp) ground the story, creating hair-standing-up-on-back-of-neck moments. Recent AFI grad, Writer, Director and Editor Arkasha Stevenson, is no doubt a new talent to watch.

Quirky and surreal, this micro budget film is reminiscent of 80’s, secret-world, adventure movies, and is the directorial debut of actor Bill Watterson. (Watterson references oddball cult movie “The Adventures of Buckaroo Banzai Across the 8th Dimension” as a reference in the Q&A following the screening.) It’s a comedy with an offbeat, romantic twist, and features a delightful eccentric misfit ensemble. The story centers around Dave (Nick Thune), a struggling artist with the all too familiar problem of never being able to finish a project. When his live-in girlfriend Annie (a wonderfully subtle performance from Meera Rohit Kumbhani) is away for the weekend, he decided to set his sights a little lower, and build a cardboard maze in their living room. The catch? It takes on a rather evil mind of it’s own, and being much larger on the inside, Dave gets lost and is unable to come out. Annie recruits the help of their hipster, weirdo friends (including a documentary film crew, a hilarious performance as Doco-Director by James Urbaniak) and they all embark into the maze to get Dave out. There are some incredible practical effects, including stop motion and cut motion effects, as well as some delightful and beautifully crafted puppetry, lending the film a very textural, handmade feel. One highlight is the red confetti sprays in place of paper blood when (spoiler alert!) some of the friends come to untimely ends. The movie is fun, thoughtful, funny and full of heart; an impressive debut.

In this video taken at the Q&A after the screening, Watterson explains the two types of love that his story explores:

No Other Way To Say It | Narrative Short

Directed by and written by Tim Mason, this laugh-out-loud short film tells the simple story of the recording of a radio ad. Set in a voice-over recording studio, separated by the glass of the booth we meet our set of familiar characters. The eager to please artist, the disinterested engineer and the clients who think they know what they want but have absolutely no bloody idea. Sound familiar? It is, but it’s approached in a fresh way with the inclusion of a secondary, parallel storyline involving texting with your not so tech-savvy Mom. The actors (Beth Melewski, Sue Salvi, Megan Kellie, Cayne Collier, Ed Flynn) are Second City alumni and they are on point, so much so that their dialogue feels so natural, quick and witty that you would assume it’s improv, but Mason assured us in the Q&A that this was mostly not the case. It’s a terrific example of the successful formula of a simply idea, well executed. Watch the full film below.

Sundance is an incredible experience and festival, the level of creativity is simply inspiring. Here’s the round-up of the winners: https://www.sundance.org/blogs/news/sundance-institute-announces-feature-film-awards-for-2017-sundance-film-festival

At Front Runner Films we approach every production, regardless of the type of video we are creating, with the same first step; uncovering what the heart and humor of your brand, product or service is. We are a group of filmmakers whose greatest passion is to tell stories and we’d love to tell your company’s too. Use the form below to say hi and start the conversation and collaboration.